A transformative trip to Jamaica

Students on the UBThisWinter study abroad in Jamaica pose for a group photo at Stush in the Bush, a sustainable Rastafarian farm.

The UB group set up a small clinic in the remote village of Silver Hill. They brought along a local physician, and provided the town's shopkeeper with an automatic blood pressure cuff so that locals can monitor their blood pressure going forward.

UB student Kelly Schlifke plants a coconut tree with a worker at the sustainable Rastafarian farm Stush in the Bush. UB students planted coconut and cypress trees to help leave their own sustainable mark after they left.

UB students visited Lifeline, a Rastafarian afterschool program in the middle of Kingston, which offers writing and art classes for inner-city students.

A wide variety of fresh fruits and vegetables on display at Papine, a local market. As part of their experience, students explored area markets and farms to determine the availability and cost of fresh food, and visited various restaurants and other food outlets to assess the nutritional value of prepared food.

Jack Sprat restaurant in Treasure Beach, a fresh seafood eatery where students learned from the marine biologist lab at the University of the West Indies about the problem of overfishing.

A student holds seashells on a beach along the Caribbean Sea.

Share This Print
“When they have that conversation with someone else in the community and they realize, ‘Wow, this is what I want to do,’ or, ‘This really makes sense’ — that’s what I live for on these study abroad trips. ”
Jessica Kruger, clinical assistant professor
Department of Community Health and Health Behavior

Traveling abroad for a global perspective 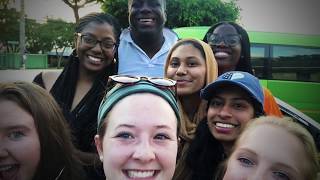 Malaike Addo offers a word of caution when asked to recount her winter session study abroad in Jamaica. “We could be here for days,” she says with a wide grin.

Her mind is racing as she reminisces waking up to the sound of the waves of the Caribbean Sea crashing on shore, bicycling through the country’s famed Blue Mountains to learn about coffee production and talk with rural Jamaicans at a mountainside health clinic, and eating the incredible food.

“We got to enjoy all these foods. I had the most amazing bread I’ve ever had in my life. It was just so moist and the outside was crispy,” says Addo, who transferred to UB from Lehman College in New York City.

“The trip opens you up to so many things. Maybe there’s a type of food you never thought you’d try but you tried it and you’re like ‘Oh my god, I actually like this.’ You can’t go on a study abroad being closed minded. You need to be open minded because you’re going to learn about yourself.”

Those two weeks in Jamaica in January definitely changed Addo. She has seen the difference; her friends have, too. She’s more laid back, confident and vocal than she was just a few weeks ago. It’s precisely the transformation she was told she would undergo when students who’d previously participated in the Jamaica study abroad spoke to the group a few days before they left.

At first, Addo didn’t believe it. “I heard it a million times and I was like ‘Yeah, yeah, whatever,’” says Addo, a senior public health major who’s getting a minor in law. “But they weren’t lying.”

UB student Nayana Madhudi plants a tree at the sustainable Rastafarian farm Stush in the Bush.

Those transformative moments are exactly what Jessica Kruger, clinical assistant professor in the Department of Community Health and Health Behavior, School of Public Health and Health Professions, loves about study abroad experiences.

“You get to actually see that light bulb moment, and get it in the most unexpected places sometimes, where something just clicks,” says Kruger, who organized the Jamaica trip with Harold Burton, associate professor emeritus of exercise and nutrition sciences.

“When they have that conversation with someone else in the community and they realize, ‘Wow, this is what I want to do,’ or, ‘This really makes sense’ — that’s what I live for on these study abroad trips,” Kruger says.

The Jamaica trip — which was geared toward students in health-related fields — focused on behavior-driven diseases. It was one of nine experiential learning study abroad programs offered through UBThisWinter. Others included trips Costa Rica, England, Germany, Italy, Korea and Wales.

Jamaica is an interesting place to study because it’s a developing country, and Western dietary influences are creeping in as it becomes more industrialized, says Kruger.

“Ten or 20 years ago, there wasn’t the plethora of fast food chains that exists now in Jamaica. And with this comes the negative health impacts of diabetes, hypertension and a growing amount of obesity,” she says.

“This has really strained the health care system, and we hear from many health professionals while on the trip how this continues to trend upward and is really worrisome since there is universal access to health care available in Jamaica,” Kruger adds.

Students explored how lifestyle choices related to food intake and physical activity levels are linked to obesity from two perspectives: the United States and Jamaica. The U.S. has one of the highest obesity rates (37%) in the world, while Jamaica’s is currently much less. But Jamaica’s obesity rate is rapidly increasing and is now a major public health concern. Diabetes, high blood pressure and cardiovascular disease are also on the rise.

During their two weeks in Jamaica, students explored markets and farms to determine the availability and cost of fresh food.

During their two weeks in Jamaica, students interacted with faculty and students in health-related disciplines at the University of the West Indies, where they stayed; explored markets and farms in the area to determine the availability and cost of fresh food; and visited various restaurants and other food outlets to assess nutritional value of prepared food.

“When you go to a restaurant, they have jerk chicken with French fries. French fries aren’t a Jamaican delicacy. You see higher rates of obesity because that Western food is coming in,” says Addo.

They planted coconut and cypress trees.

They met with the owners of a Rastafarian farm — where everything grown is used — visited a mental health clinic and a community health clinic. They also set up a mountainside clinic during which they checked people’s vitals.

“If one vital was really high, we were able to talk with them about how changing their lifestyle or one little behavior modification could really play a big role in improving their health,” says public health major Rachel Wenner.

“It was a complete cultural immersion,” Wenner says. “We didn’t go to the touristy sites. We went to the places that the people recommended and where we could get a truly Jamaican experience. Whether that ranged from a sustainable organic farm in the middle of nowhere to a hospital that might not be glamorous, we were learning about what it’s truly like to be a Jamaican.”

The trip further inspired Nanzeeba Ahmad, a biological sciences major and public health minor who wants to pursue a career in genetic counseling. Ahmad plans to incorporate the skills she acquired on this trip in learning about the biopsychosocial model of health care, which examines all of the factors that contribute to whatever health condition a patient is experiencing.

Each group maintained a daily log and received a GoPro so they could create a short video presentation that told the story of the Jamaican lifestyle and the impact of changes over time on the sudden and precipitous rise in behavior-driven disease there.

When the students returned to the dorms at the end of each day, they sat around talking, sharing and reflecting on what they’d experienced that day.

“We barely even used our phones,” Addo says, before stopping and shifting gears.

“Oh, I didn’t even tell you about Devon House. It has the world’s best ice cream.”